It’s been a while since I did a photo essay, and this one isn’t really a photo essay, it’s more a chance for me to share my experimentations from my adventure yesterday.

I was at Markit @ Federation Square. For those of you not in Melbourne Federation Square is a modern building complex that was very controversial when it was first unveiled. Its exterior looks largely like someone has designed a building, then decided they didn’t like it, screwed up the piece of paper, changed their mind, and built the crumpled version. It’s all funny angles, concrete, steel, glass and triangles; always triangles. It houses some of the National Gallery of Victoria (NGV), the Australian Centre for the Moving Image (ACMI) and a bunch of restaurants and cafés and bars and open spaces and boutique gift shops and a stage. Markit is one of the larger semi-regular markets that can be found around Melbourne, and my markety friends Wade and Jen had a stall there, so I went to visit them.

At some point while I was chatting with them, I suggested that I get some shots of them working the stall, seeing as it’s usually one of them who has to take the photos and there are not many photos of the two of them. I got some lovely photos of their stall, I did some experiments with long exposures to get a sense of the people scurrying about but they turned out too blurry (I didn’t have the tripod with me) and I took a series of photos of a bunch of fake flowers in their stall that I kind of love.

This is the first of the set; this was taken using the automatic settings on my camera. You can see Jen in the background as well as a little bit of the glass and triangles typical of Fed Square.

This one is basically the same shot but I overexposed it. I like the way that the background becomes whitewashed and the flowers lose some of their intensity of colour. You also lose some of the detailing because of the lack of contrast. 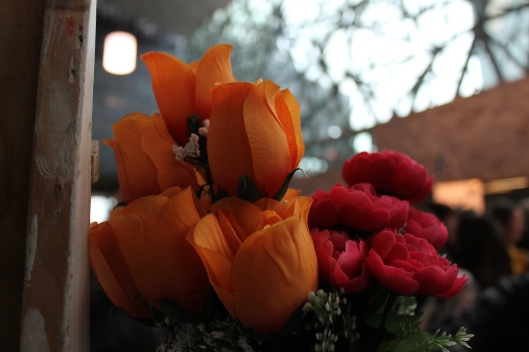 Of course if you’re going to overexpose a shot, you may as well underexpose it too. I like that this one seems more brooding, the background is much more prominent that either of the previous two and it’s not just that the composition is slightly different. 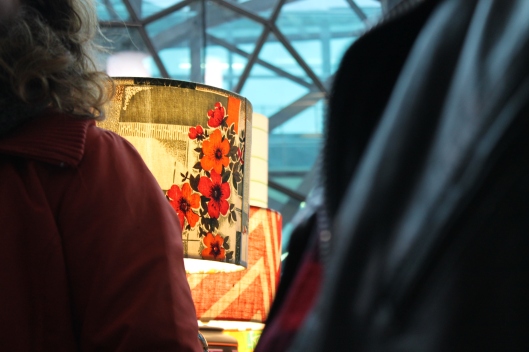 This one was a sneaky shot – I just held the camera at my side and clicked it without looking at what was in the shot. I think this is an interesting shot because of the way the lamp is not really the main focus of the composition but it sort of steals the show; popping it’s head out from behind Jen’s shoulder.

I am setting myself the task of spending more time working on my journey; writing, reading, photography, drawing, sketching, playing music. I think that every so often I realise how much I have been sucked into things like TV and how lazy I’ve been with my art. Hopefully I’ll have some more awesome stuff to share with you soon.