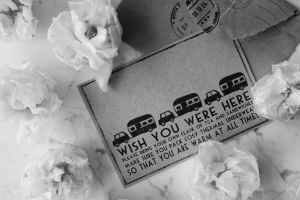 Be creative, that will help pass the time
be disciplined, use the time wisely
but how can I when everything is
broken and dying?

The world is faded, grey
an old picture, a flashback
in a movie. Desaturated
technicolour of not seeing friends
lacking human touch, dulled lust
all that remains is blunt hunger
ever present and never satiated.

On Wednesday night, for the first time, I realised that I’m not shouting into a void. I’ve been doing this blog since November 2011. That’s almost four years now, and while I’ve been a bit sporadic at times, I feel like I’ve kept the flow of material coming that whole time.

I’m obsessed with watching my stats, going into the back end and seeing how many visitors and page views I’ve had every day. Days where I’ve had no visitors make me feel a little bit sad inside, and days where I have more than ten page views make me feel important. But the problem with that is even though I know there are people out there reading my work, I have no way to tracking who they are and whether, or how, my work affects them. In that way I’ve felt a little bit like I’ve been shouting into the void; writing my experiences and feelings down and sharing them but getting minimal feedback on it. Until Wednesday night.

On Wednesday night I caught up with a guy I know through Facebook. We met at a party a few years ago, and I hung out with him and his wife a few times. But then we sort of drifted and haven’t seen each other for ages. We move in some of the same circles, there’s some crossover on the social Venn diagram, and we’ve bumped into each other a couple of times, but you know how it is, just sort of floated through time. We caught up this week because he had some vinyl records that he was getting rid of and I said I’d definitely take them off his hands, some Adam and the Ants and Violent Femmes. So we actually arranged to meet, on purpose, in a pub, and had a chat.

This is all a bit of a long preamble to the point I’m trying to make, which is this guy told me that he had read some of my blog posts and that, while not instrumental, the posts about trying to find my happiness were influential in some changes that he made in his life and career. I admit I was a little bit floored by the idea. That someone, somewhere out there, had heard what I was saying and it had resonated with them. I discussed the experience with another creative soul I know recently, and she said that I was never shouting into a void, I was “shouting into the ear of a man who needed to know where the light was to steer himself towards it”. It’s such a beautiful way to phrase it, one I wouldn’t have thought of myself.

Writing is known to be a fairly solitary occupation. We sit alone in our rooms and scribble away hoping against hope that one day someone will read what we’ve said, and feel something. Out here in the blogosphere there are a lot of us clamouring for space, and for validation. I don’t want to discount all of my beautiful friends who have read my blog and written me nice comments. I know that totally counts as validation, and I don’t want to disregard it, but somehow this guy’s experience of taking what I’ve said and using it to make changes in his life towards happiness, struck me profoundly, right in the feels.

Now, when I feel like I’m shouting into the void again, or when I wonder what the point is of all this, I’ll remember this guy’s story. I’ll remember that just because I can’t see the effect I’m having on people, doesn’t mean I’m not having one. I’ll hang on to this moment and just keep writing, because I have to do it for me, because I want to and because I need to write, and hope that it helps someone else out there, whether I hear about it or not.