The first week of this challenge has come and gone, oh how time keeps passing by!!

As promised, here are my photos, posted originally on my Instragram #dragongirlau (with my phone camera because I’m too lazy to transfer photos from my proper camera to my phone so I can Instragram them).

Day 3 – A collection of cheeses for dinner last night, and I didn’t even have cheese dreams!

Day 4 – From all of us here at Rod Laver Arena to see Michael Buble thank you for coming out and caressing us with your caramel vocals. So good! 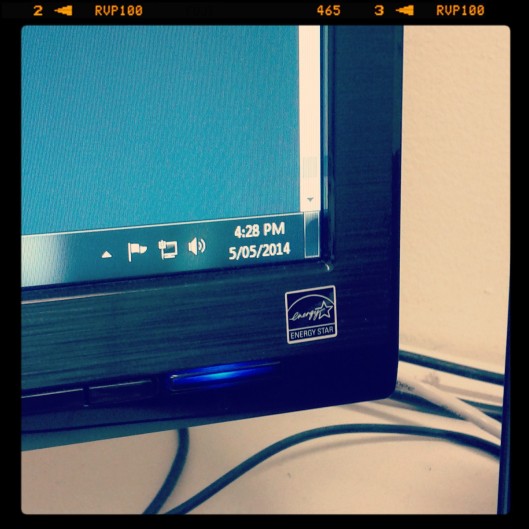 Day 6 – from down below, this was an attempt to take a picture of the inside of the State Theatre in Melbourne, I thought it was arty.

Day 7 – today’s prompt was taken from above, I found this abandoned scrap of knitting in the Ming Wing at Monash University, I thought it was sad. 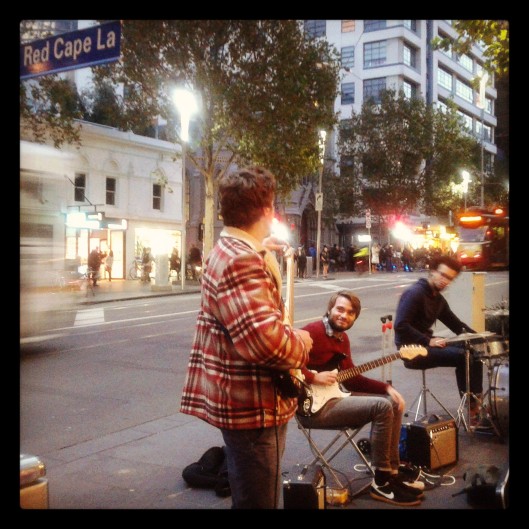 Day 8 – the theme today was blue, inspired by the blue Melbourne street sign I snapped these buskers, when I asked what their band was called the said they didn’t have a name.

If you’re a follower of this blog, you would know that I went to Sydney last week to see NIN, QOTSA, Brody Dalle and Sweethead and it was amazing. Last night, on the spur of the moment my other plans having fallen through, I decided to go again.

This time in Melbourne’s Rod Laver Arena, a venue about a third bigger than the Sydney Entertainment Centre, I saw the same line-up, in the same order, but what made it all the more exciting was, I can honestly say, the shows were significantly different.

Brody Dalle and band were awesome again, even with Brody’s voice suffering a bit from getting a lurgy. Her guitarist was wearing a NIN shirt, which I thought was pretty cool, and she was looking the part of Rock Goddess wearing all black. More than a week into the tour they seemed to have settled into their role as openers, so much so that Dalle tried to get the crowd to sing ‘Kookaburra sits in the Old Gumtree’ with limited success. I’m all for audience participation, and I think it’s great to get the crowd energised, but that song is super naff, and I think the rest of the audience agreed. That being said, seeing them perform a second time I felt like I was better able to appreciate the musicality and skill of their work; I had a better understanding of where the music was going, what it was trying to say, and as a result I was able to rock out harder than at the Sydney show.

NIN were on next, unfortunately this was the same order as I saw the show in Sydney, but that was about where the similarities ended. While many of the tracks on the setlist were the same as the Sydney show, there were also a number of tracks that were not played in Sydney, and according to Gabrielle, a friend who saw both of the Melbourne shows, were different to Friday night too. I was disappointed to hear that NIN brought Mariqueen Maandig out on stage to do some How to Destroy Angels songs on Friday night, I would have really loved to see them performed live and to see the dynamic between Mariqueen and her husband Trent on stage. It does give me something to look forward to though, one day I’ll see them.

The crowd last night were much more into NIN than they were in Sydney. I haven’t had the privilege to see the same band play to different crowds in person before and I am truly astounded by the difference it makes to the quality of the experience. I mean I know I said that the show in Sydney was the best thing since sliced bread, and it was at the time, but I can now say that last night’s show was better. There were moments when the whole mosh pit threw their arms up into the air with Trent, something that didn’t happen in Sydney, and perhaps indicative of a larger overlap of NIN/QOTSA fans among the Melbourne audience.

As with Brody Dalle, being the second time I attended I was able to get different things from the experience, specifically (and perhaps as a result of being on the other side of the stage) I was able to get a better understanding of the talents of the people in Trent’s band; the drummer, Ilan Rubin, played guitar and cello, the guitarist, Robin Finck, played violin and synths, and keyboardist, Allesandro Cortini, played drum machines. I know that Trent is a hard task master, and a multi-instrumentalist (as demonstrated by his playing saxophone on one of the albums) and it is clear that he surrounds himself with others who are just as talented. 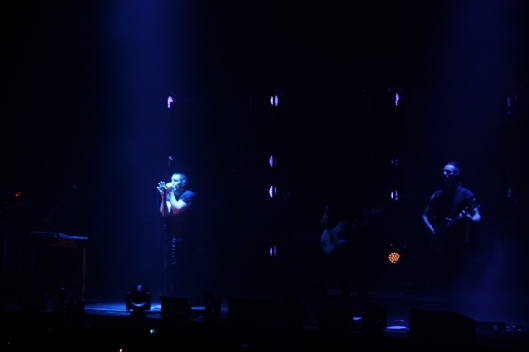 The set was finished with Hurt, as it was in Sydney, and I suspect every set NIN does. While in Sydney, with a lower energy audience, this left me feeling a bit bewildered and sort of melancholy, last night it was just the right note to end on; beautiful, thoughtful, classic NIN.

During the break I decided that I had to race off to the merchandise stand and get myself a tour tshirt, something which I didn’t do in Sydney because the line was moving too slowly and I couldn’t be bothered waiting. I also invited Gabrielle to sit down with me (I had better seats than she did and the seat next to me was apparently vacant). We then got chatting with a guy sitting behind us and, between the two of us, became the biggest combined NIN/QOTSA fan ever listing every album both bands had ever released and evangelising their virtues to this English tourist. Hopefully he came away enthused about the music and not thinking that we were idiot savants or complete weirdos.

And then came QOTSA, who entered the stage to their same countdown and who went straight into the head banging, ear bleeding, heart pounding rock that they do so well. I may have thought that the crowd was into NIN, but I will freely admit that the response to QOTSA was even bigger. Gabrielle and I discussed later that perhaps it’s an attribute of NIN’s music that makes the crowd ever so slightly more subdued, maybe it’s the undercurrent of melancholic misanthropy or perhaps it’s the irresistible beats of QOTSA that make you want to move. Like NIN, QOTSA played quite a different set list to what they played in Sydney. I was interested to note that while at the Sydney show every song was accompanied by an animation behind the band, they had animations only on about half of the tracks last night. To be honest, I prefer it when there are songs which are just the band. The animations, as interesting as they were added another dimension to the songs and therefore, in a way, detracted from the ability to focus on the music. Having a break in which I could really focus on Joshua Homme’s Elvis-eque hip-shaking guitar work, or Troy Van Leeuwen’s sliding footwork gave the show a sense of light and shade which added to the experience for me. 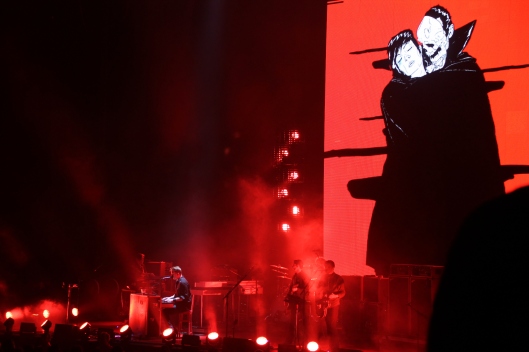 QOTSA perform ‘The Vampyre of Time and Memory’ at Rod Laver Arena, 15/3/14

To top off the evening, and after spending the entire night chair dancing, I decided to get up out of my seat to dance to QOTSA’s encore set. I had mixed feeling about the concert etiquette of this in the seated section but most of my section were standing so I decided it was fine.

In summary then, I have to say that I know the expense of seeing these bands perform a second time might seem like a waste, but for someone like me it was certainly worth it. As I get older my appreciation for the art of live music is growing, but I will probably never have the chance to see two (well, three) such amazing bands, for whom I have such love and respect, play twice in two weeks again, and that my friends, is why I did it.