On Friday night I took myself to see a production of ‘Quills’, by Doug Wright, performed by Mockingbird Theatre. Some of you may know that ‘Quills’ was made into a movie with Geoffrey Rush in 2000, which is an excellent film and I would encourage you all to see it at some point.

The question is how is one to review this production? I should probably start with stating this play made me uncomfortable, and that’s great. It’s an uncomfortable work, exploring lots of difficult subject matter – censorship, obscenity, moral responsibility, insanity – and I commend the entire cast for committing so completely to making the audience shift in their seats.

The cast was quite large, along with the main speaking parts, seven in all, there was a chorus of 21 lunatics who where always on stage or roaming the audience. Each lunatic had their own specific way of being, some were catatonic, some manic, some lewd, some withdrawn. The note from the director states that the lunatics were not written on the pages of the script but their presence certainly grounded the work in the very, very strange.

The play was performed in a space called the Meat Market, so named because it was the site of a meat market, in North Melbourne. It is a vast, empty warehouse of a space. The audience were in four blocks, with the stage set up in three sections in the middle. The use of space was very clever and I felt the line between on stage and off was blurred, adding to the uncomfortable feeling of being inside Charenton.

It seems appropriate now to discuss the protagonist, the Marquis De Sade, who was committed to the Charenton Asylum, for criminal and moral transgressions, where he died. Played here by Adrian Carr, the character of the Marquis is complex, stubborn, tender and vicious. He also spends more than half the play nude, having been stripped of his clothing for disobeying the asylum staff. The poster and tickets both warned of adult content and nudity, however I doubt the audience expected that much nudity! The Marquis, and of course by extension Carr, was regal in his nakedness, all of the mannerisms, the strut, the peacock-like pride, remained even when the costume was gone. That being said, one could argue that the costume was still on, emperors-new-clothes-style, that Carr was wearing the character of the Marquis as a costume.

Of the other leading actors I particularly enjoyed the Abbe de Coulmier, played by Dylan Watson, whose journey through the play is almost as remarkable as the Marquis’, although less nude (still a bit nude). Throughout the performance I felt like Watson was playing the role for himself, and I felt strangely voyeuristic, particularly towards the end, looking over his shoulder as he disintegrated.

It interested me that the ending of the play is quite different to the ending of the film, not so much in overall outcomes, but in the detail. I’m always fascinated by the way that people get around the difference in media – the things you can do with a live audience, because they’re so sucked into the world of the performance are often more extreme, more melodramatic, or just more, than the things you can get away with on screen (with a few exceptions).

If I had to give one criticism of ‘Quills’ it would be that it got a little bit shouty at the end. I acknowledge that it was the climax of the story and that the characters were becoming more and more desperate, but the variation of tone sort of slipped away a little, though this is a minor criticism.

Overall, I would rate this performance a 4.5 out of 5. Get out there and support your local independent theatre productions, you may be surprised how it turns out!

Again, slightly late, but y’know, whatever.

As promised, here are my photos, posted originally on my Instragram #dragongirlau (with my phone camera because I’m too lazy to transfer photos from my proper camera to my phone so I can Instragram them).

Day 9 – Sunset of St Mary’s church in North Melbourne, one of my favourite times of the day.

Day 12 – a meal ready made because I didn’t go food shopping over the weekend. 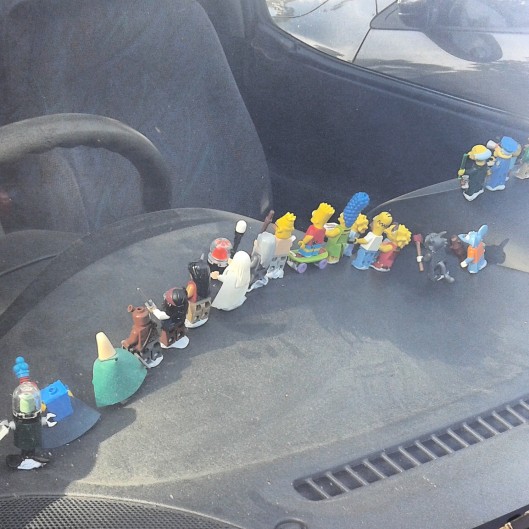 Day 14 – Lines. Took me a whole day to realise they could be curved 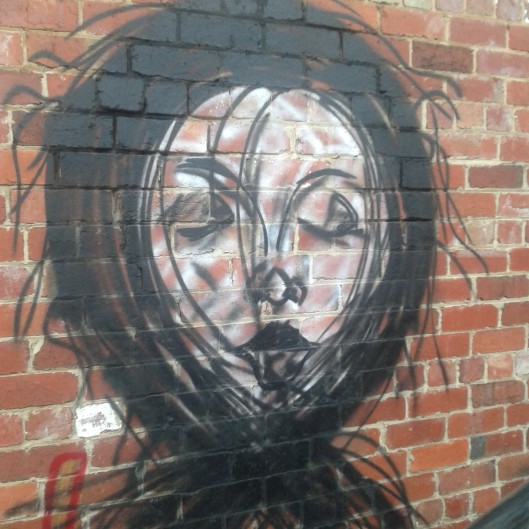 Day 15 – From where I walk. Awesome graffiti streetart in North Melbourne.

Day 16 – My trusty lava lamp. I’ve had it since I was 15, it’s followed me when I moved and I always feel warmed by the soft glow it creates

Day 17 – you can always find a bag left outside a rubbish bin; the detritus of urban life