Most of us would have been out celebrating New Years Eve in style last night. Myself I was at a friend of a friend’s apartment in Footscray (inner Western suburb of Melbourne) on the 8th floor. It was a fairly low key affair, there was a little drinking, a lot of eating, some movies and a FANTASTIC view.

We couldn’t see the city from the apartment because it was facing the wrong way, but when it came around to midnight there were fireworks displays all along the horizon, it was truly spectacular and something I had never seen before.

I took the new fancy camera along in case any good opportunities arose and I used the time to experiment with some of the setting for night photos. These were using the ‘creative auto’ settings. 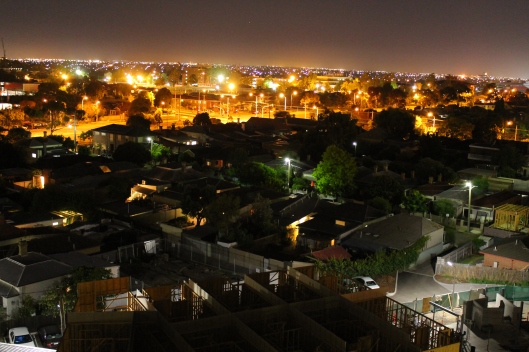 This one was .8 sec exposure, F4.0, it was on a setting for no flash, with warm colours. 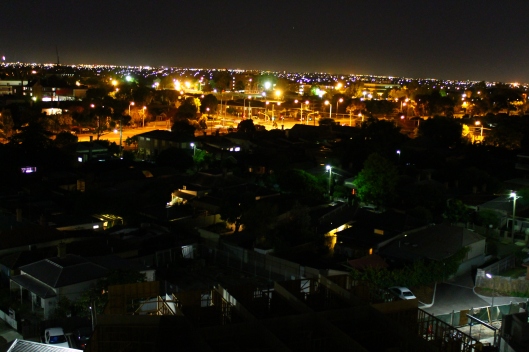 It’s quite subtle but I think you can see the slightly different colourings – I guess the camera must change the white balance or something I’m not really sure. I’ll know more after I’ve done a beginners course in DSLRs on 20th Jan (excitement!)

This last one is slightly to the left of the views above, exposure of 0.4 sec, F4.0, no flash set to warm colour.

Once I have a better understanding of the settings and how to get the colours and the exposures to do what I want I will try to get some sunset pics, and maybe some more night pics. I really like the stuff Trey Ratcliff does, his colours are always amazing, but I will need more practice to get them under control – just as long as I have it for Burning Man I’ll be set.