Today I bring you my interview [socially distanced via the interwebs] with the fabulous Nicole Henriksen. Nicole has written their debut work of prose, Daydreamings, following years writing and performing several award-nominated theatre and comedy shows.

Daydreamings is a collection of flash fiction, in which Henriksen dips into the stories of diverse friends, family, and lovers, over thirty-two pieces.

A remorseful ex attending a wedding, a friend helping another be brave and honest, a disconnected father trying to finally find common ground, the excitement of a new romance, and so many more. 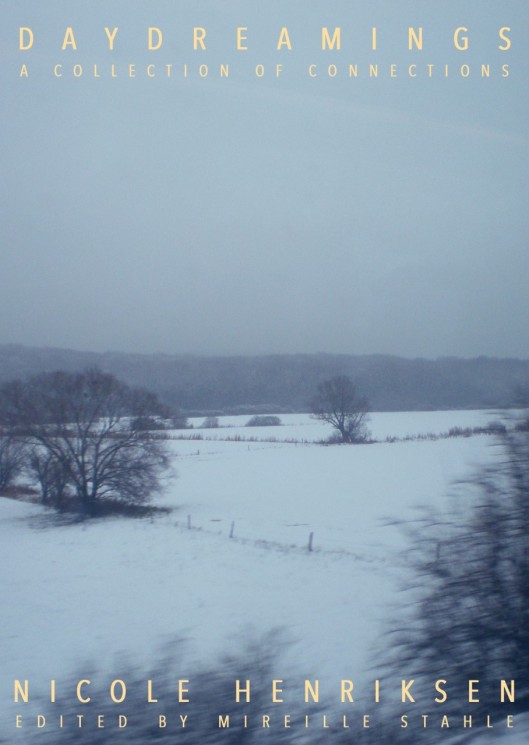 Fleur: I met you in 2015 at the Edinburgh Fringe Festival after seeing your show Honeycomb Badgers on Acid, and we’ve been in contact since then. I really enjoyed your comedy/theatre work, tell me about this new project, how does it relate?

Nicole: Thank you for reminding me! I had forgotten how we met, that’s the chaos of Edinburgh Fringe for you. Thank you for your kind words about my live shows, they’ve definitely influenced my prose. Daydreamings, and all the prose I’ve written, is very much composed in the rhythm of the spoken word.

The way I use language in my prose, is more similar to a song lyricist or playwright, than a straight up and down author. It’s something I wasn’t aware of, until my editor, Mireille Stahle, pointed it out to me.

But I really like prose to feel like someone is reading it out loud, as though it has flow and feeling, as though the beats of the words have meaning, and sit well when read out. This is something I didn’t know was unusual, or interesting, because I myself don’t and can’t read, it’s the reason I started writing as a child, and developed an ability to bullshit an essay, without reading the main text, as a teenager.

F: In the last few months I’ve watched your journey since getting your Autism diagnosis. Tell me about how this has changed your creative process and/or your life more generally?
Thank you for following along on that journey, it’s strangely special to share it with other people. It’s an interesting and awkward process for sure, a lot of emotions, difficult and painful self-reflection, and learning about my brain.

N: There’s a relief with a diagnosis, but also a daunting new reality, and also a realisation that it’s not a silver bullet. Every issue I’ve had in the past isn’t magically erased because I now understand why I find certain things so incredibly challenging that I have panic attacks, when other people can just fill out the damn form.

It’s changed my creative process by giving me a greater insight into how my brain works differently, and in turn, how I apply that to my writing. For example, I often am not privy to a lot of “normal” experiences, and end up an observer of those experiences, rather than a participant. It was something I felt guilty about before my diagnosis, but now, I realise it’s one of the main reasons I feel so compelled to write.

F: Your show Makin’ it Rain referred to your work in the sex industry, does this new work, Daydreamings, refer to this work?

N: It was a real “kill your darlings” moment, but I had a couple of pieces about sex work, and they simply didn’t fit with the collection. The tone was all off, so I had to cut them out.

In this collection, I’m really looking to explore connection, and to me, connection has to be genuine to have meaning. I wouldn’t say that for me, the connections I make in the sex work industry, at least with clients, are genuine in that same sense. I also think that honestly, that’s a whole collection in and of itself.

F: As a writer, I try to walk the line between serious and absurd in order to shed light to issues I believe are important. How does maintaining this balance inform your writing?

N: That’s a great way of putting it. I’d definitely say I’m intrigued by that same balance of serious and absurd, though I lean more toward a balance of awkward truth and tension-relieving comedy. It’s something I very much brought to my theatre works as well.

I really feel like intimacy and genuine connection, which is the main theme of this collection, is inherently awkward and cringey, there’s something so embarrassing about some of our most honest thoughts, desires, shared moments, it’s something mostly only shared with trusted people in our lives, in my observations. And I also feel that there’s a chance for comedy in some of those moments, both in terms of banter between characters, and in the harrowing experience that is sharing those cringey truths.

F: Finally, tell us about your work Daydreamings.

N: Daydreamings at its heart, is an exploration of the mortifying ordeal of being known, and its overwhelming benefits, despite how difficult it might seem at certain times, perhaps after a fight with a friend, or a romantic break up.

I’m obsessed with connection, because it’s something I’ve struggled with as an autistic person, and something I’ve always sought to have tremendous control over, which of course, is a futile exercise. So, because of that lived experience, I still have a lot to learn, but I have a lot I’ve already taken away from the many types of connections I’ve successfully, or unsuccessfully, made.

And in Daydreamings, I dip into a diverse series of moments with friends, lovers, family, and others, to share some of these experiences, and the challenges that come from trying to simply connect to other human beings, as we move through life.

To purchase a copy of Daydreamings click here.
And folks can find out more and read a free sample on my website here.