On Monday I took advantage of the cheap tickets at Cinema Nova in Carlton. Seriously, $6 for a movie before 4pm – if you’re not working, why wouldn’t you? I was tossing up between ‘Frank’ and ‘The Rover’, I chose the latter because it started sooner. I’d heard a bit about the film, I vaguely recalled Marc Fennel having talked about it on Triple J, and I like Guy Pierce so it seemed like a good plan.

I went into it with absolutely no expectations – I didn’t have much idea what the premise was, nor had I seen Animal Kingdom, the first film by the director David Michod. This may not have worked in my favour. My initial reaction to this is that it’s Mad Max but rewritten with George R. R. Martin’s penchant for death. It’s bleak, and I mean bleak. Walking out I felt quiet, a little overwhelmed, and with a feeling of ‘if this is where the world’s going, we may as well all kill ourselves now and save the bother.’ But let me deconstruct that a bit.

Firstly, the narrative. The opening of the film explains that we’re ten years after ‘the collapse’, no context is given for this. I becomes clear as we go along that there was some sort of serious global economic crisis thing, that law and order has fallen over, that Australia is a giant open cut mine, and that the money and work have run out. It’s a dystopian future scenario. The first thing that happens is Eric’s (Guy Pierce) car is stolen and the rest of the story is about getting the car back.

It is a slow moving film, with lots of atmosphere. This is built in part by the soundtrack, by Antony Partos, which felt very post-apocalyptic, all banging piano strings with hammers and bowing bits of metal. It was also very loud, which I expect was deliberate to create a sense of oppression of sound. At least it did for me. The rest of the atmosphere is developed by the lack of dialogue. As Fennel describes, it is not the words that matter here, but what is not said – the gaps between the characters, their PSTD-esque stares, in particular from Eric, who is a mysterious and hard-to-sympathise-with character. I suspect that this impression is heightened by the focus on listening – what I mean is how much of the film shows actors reacting to dialogue as opposed to acting dialogue. In particular a scene between Eric and Sgt Rick Rickoffersen in which Eric talks about how he got to this point and we watch Rickoffersen hear his story. The effect is powerful in a way that it wouldn’t be if we’d watched Eric talk.

Visually, this film is typical of the Australian outback film. These is a lot of dust, and sweat, and reds and browns and yellows. Everything is old and broken and dirty. I don’t know how well an international audience would relate to this, but I felt like it was very true to the tone of the outback, in this case filmed in South Australia – it’s hot, dry, brown and empty. 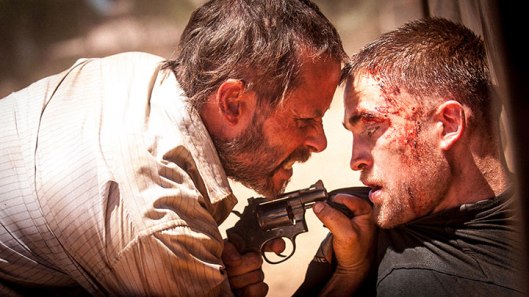 Finally to the acting. Eric and Rey (Robert Pattinson) are extremely different characters, and this was borne out very well in their physicality. Eric was still, almost zen-like in his demeaner, he stares straight ahead and barely seems to be affected by anything going on around him. Rey, on the other hand, is jittery, fidgety, scattered and potentially low in the intelligence stakes. Rey also has an almost unintelligible southern American drawl which is juxtaposed to Eric’s crisp Australian speech. I’ve always thought that silent acting is the hardest, being able to convey your whole character without words, and this film does really well in this regard.

So what didn’t I like? Well for one thing, this film has only two female characters who don’t meet, so it fails the Bechdel test miserably. Secondly, I’m not sure how well it will survive over time given that it leaves the viewer feeling absolutely defeated – I don’t know how many people will chose to rewatch a film that’s this intense. I felt similar about Nymphomaniac actually, it requires quite a lot from the viewer and doesn’t give much back.

In a nutshell, I’m going to give this 3.5 out of 5 stars, there are some excellent parts to this film but overall it was just a little bit much.