On Friday night I went to see a friend perform in an amateur production of a new play called ‘Below Babylon‘ at the Revolt Art Space in Kensington. I’d met Chris (Grant, who plays Harry) at an acting evening class about this time last year, and while I wanted to show support for his work, I wasn’t sure what to expect for the production.

It didn’t take me long to realise that my doubts about the play were unfounded.Written by Gabriel Bergmoser, the story takes place in dystopian future Australia; the economy has fallen over and everything is run by the crime groups. The rich sit in their glass towers and everyone else tries to survive in the ghettoes. 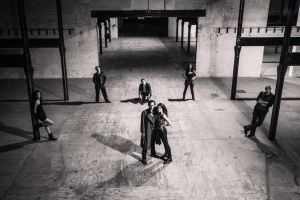 Below Babylon: Bitten By Productions

The cast for this production was small, just seven, and the whole thing takes place in Harry’s bar, but don’t think that makes it boring. The first half was intense but it had nothing on the second half; there were blood packs and gunshots and violence aplenty, but it never crossed the line into burlesque.

I don’t go to many small theatre productions so I wasn’t quite prepared for the gut-roiling revulsion and finger tingling fear that was invoked in me that night. The fact that these actors are right there in front of you; being thrown around and shouted at in a tiny theatre in a warehouse in the middle of the night had an unexpectedly powerful effect.

The weight of this was borne by two characters; Lincoln (Justin Anderson) and Reagan (Steve Young). Lincoln is a slow burner; moody, quiet, but dangerous once you rouse him. Reagan is the opposite; firey, unpredictable, loud and profoundly creepy. There is a scene in which Reagan is harassing Lila (Nalini Vasudevan), a sex worker, where I felt my skin crawl as though he were touching me. Some much needed comic relief was provided by Mac (Hamish Buchanan); he’s not quite innocent enough to be cute, and not quite stupid enough to be sympathetic.

Given that I knew one of the cast I was able to spend some time talking to the team after the show. Having given them all my hearty congratulations, we got chatting about the process of putting a new show on for the first time. I was interested to hear how the script evolved with the actors and how their experience of trying to bring the words to life influenced the way the words worked. One day I’d love to be able to have something I’ve written produced and be able to learn from the process of having characters step out of my head and onto a stage.

For a small production, with little to no budget, and a new work this really blew me away. Apparently there’s a sequel too, which will be performed later this year and I hope to be able to see this. Overall, I was very pleasantly surprised by the calibre of the performances, the writing and the direction. I’m giving this 4 out of 5 stars, these guys are definitely ones to watch.